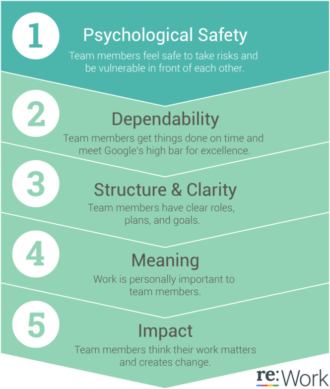 A group of us in Google’s People Operations (what we call HR) set out to answer this question using data and rigorous analysis: What makes a Google team effective? We shared our research earlier today with the Associated Press, and we’re sharing the findings here, as well.

Over two years we conducted 200+ interviews with Googlers (our employees) and looked at more than 250 attributes of 180+ active Google teams. We were pretty confident that we’d find the perfect mix of individual traits and skills necessary for a stellar team — take one Rhodes Scholar, two extroverts, one engineer who rocks at AngularJS, and a PhD. Voila. Dream team assembled, right?

We were dead wrong. Who is on a team matters less than how the team members interact, structure their work, and view their contributions. So much for that magical algorithm.

We learned that there are five key dynamics that set successful teams apart from other teams at Google:

If you answered “yes” to the five questions above, congrats! You’re probably on a high-performing team. And if not, not all hope is lost. This is a shortcut to help you figure out where to focus, how to get better, and a way to talk about this concept with your teammates in a structured way.

Psychological safety was far and away the most important of the five dynamics we found — it’s the underpinning of the other four. How could that be? Taking a risk around your team members seems simple. But remember the last time you were working on a project. Did you feel like you could ask what the goal was without the risk of sounding like you’re the only one out of the loop? Or did you opt for continuing without clarifying anything, in order to avoid being perceived as someone who is unaware?

Turns out, we’re all reluctant to engage in behaviors that could negatively influence how others perceive our competence, awareness, and positivity. Although this kind of self-protection is a natural strategy in the workplace, it is detrimental to effective teamwork. On the flip side, the safer team members feel with one another, the more likely they are to admit mistakes, to partner, and to take on new roles. And it affects pretty much every important dimension we look at for employees. Individuals on teams with higher psychological safety are less likely to leave Google, they’re more likely to harness the power of diverse ideas from their teammates, they bring in more revenue, and they’re rated as effective twice as often by executives.

Googlers love data. But they don’t want to sit idle with it. They want to act. So we created a tool called the gTeams exercise: a 10-minute pulse-check on the five dynamics, a report that summarizes how the team is doing, a live in-person conversation to discuss the results, and tailored developmental resources to help teams improve. Over the past year, more than 3,000 Googlers across 300 teams have used this tool. Of those Google teams, the ones that adopted a new group norm — like kicking off every team meeting by sharing a risk taken in the previous week — improved 6% on psychological safety ratings and 10% on structure and clarity ratings. Teams said that having a framework around team effectiveness and a forcing function to talk about these dynamics was missing previously and by far the most impactful part of the experience.

From sales teams in Dublin to engineering teams in Mountain View, we’ve seen that focusing on this framework helps all types of teams improve.

This website uses cookies to improve your experience while you navigate through the website. Out of these cookies, the cookies that are categorized as necessary are stored on your browser as they are essential for the working of basic functionalities of the website. We also use third-party cookies that help us analyze and understand how you use this website. These cookies will be stored in your browser only with your consent. You also have the option to opt-out of these cookies. But opting out of some of these cookies may have an effect on your browsing experience.
Necessary Always Enabled
Necessary cookies are absolutely essential for the website to function properly. This category only includes cookies that ensures basic functionalities and security features of the website. These cookies do not store any personal information.
Non-necessary
Any cookies that may not be particularly necessary for the website to function and is used specifically to collect user personal data via analytics, ads, other embedded contents are termed as non-necessary cookies. It is mandatory to procure user consent prior to running these cookies on your website.
SAVE & ACCEPT